Catch up with the latest Titles information, or simply boast about ‘the one that got away’ with us on Facebook, today. 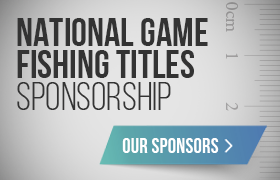